From WikiShia
(Redirected from Maryam)
Jump to: navigation, search

In Christian sources, her father's name is said to be "Joachim",[1] and in the Qur'an[2] and Islamic hadiths, he is mentioned as "'Imran". According to a hadith from Imam al-Baqir (a), 'Imran was an Israelite prophet.[3] According to Ibn Ishaq's report, his lineage goes back to David (a) the prophet.[4] 'Imran died before the birth of Maryam (a).[5] Her mother is said to be Anne, which is transformed in Arabic as "Hanna" (Arabic: حنة) the daughter of Faqud.[6]

In Christian texts, Maryam (a) has been referred to by numerous titles, such as the New Eve, Virgin Mary, Mother of God, the Intercessor, Mother of Divine Providence, the Seat of Wisdom, the Spiritual Vessel, the Mystic Rose, the Ark of the Covenant, the Queen of Angels, and Our Lady of Sorrows.[7] She is also referred to in Islamic texts as "al-'Adhra'" (Chaste) and "al-Batul"[8] which means she was detached from men or because she did not have menstruation.

Maryam (a) is said to be born twenty years before the birth of Jesus (a). However, there is no information about where she was born.[9] 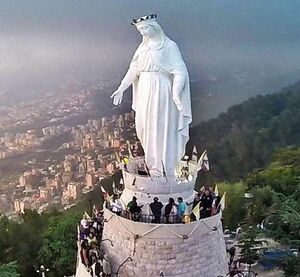 According to sources, Hanna, the mother of Maryam (a), was sterile. She could not give birth to any children until the age of 30.[10] She prayed to God and asked Him to give her a child. Her prayer was answered and she became pregnant with Maryam (a). Hanna vowed to God that her child will serve Bayt al-Maqdis. Verses thirty five to thirty seven of Qur'an 3 refer to Hanna's vow and its acceptance by God.[11]

After Maryam's (a) birth, her mother took her to the temple and left her with the priests there. They disagreed about who should be in charge of her. They drew lots for selecting the person who could take care of Maryam (a), and Zechariah (a) (Zakariyya) the prophet won the lottery.[12] He was, according to some sources, the husband of Maryam's maternal aunt.[13] The Qur'an has pointed to the story of the lottery.[14] According to al-Maqdisi's report, Zechariah provided her with milk and training, and when she grew up, he selected a place for her in the temple where she worshiped God[15] and served the temple when it was her turn. She worshiped so much that she came to be known among the Israelites as an exemplary worshiper.[16]

"27-to a virgin engaged to a man whose name was Joseph, of the house of David. The virgin's name was Mary. 28 And he came to her and said, "Greetings, favored one! The Lord is with you." 29 But she was much perplexed by his words and pondered what sort of greeting this might be. 30 The angel said to her, "Do not be afraid, Mary, for you have found favor with God. 31 And now, you will conceive in your womb and bear a son, and you will name him Jesus. 32 He will be great, and will be called the Son of the Most High, and the Lord God will give to him the throne of his ancestor David. 33 He will reign over the house of Jacob forever, and of his kingdom there will be no end." 34 Mary said to the angel, "How can this be, since I am a virgin?" 35 The angel said to her, "The Holy Spirit will come upon you, and the power of the Most High will overshadow you; therefore the child to be born will be holy; he will be called Son of God." [17]

There are different accounts of how long Maryam (a) was pregnant from a few hours to several months.[18] According to Tafsir al-Qummi, Maryam (a) delivered the baby near a dead palm and then she shook the tree. The tree miraculously turned green and bore fruits. Maryam (a) ate a date which had just fallen from the tree. She was ordered by God to be silent when seeing people.[19] When Maryam (a) took Jesus (a) to her people and they began reproaching her, Jesus (a) started to talk, informing them of his prophethood.[20]

There is a disagreement among Christian denominations over whether Maryam married Saint Joseph, the carpenter, who is referred to as Maryam's fiancé, or she remained a virgin forever. Moreover, there is a disagreement over whether she had children other than Jesus as well. In the Gospels of Luke [21] and Mathew[22], there are verses seemingly about Jesus's brothers and sisters. The Gospel of Mark has even mentioned the names of Jesus's brothers and pointed to his sisters.[23]. However, some Christians have rejected the claim that Jesus had any siblings. The Church has officially announced since the 5th century that Maryam (a) always remained a virgin and that she never married Joseph.[24] For Catholic and Orthodox Churches, the Biblical reference to Jesus's (a) siblings is a metaphorical way of referring to his kin.[25]

According to some scholars, Islamic sources also deny the story of Maryam's (a) marriage because she was a permanent servant of the temple, and never left the temple except for urgencies, including giving birth to Jesus (a).[26]

The belief that Maryam (a) was physically ascended by God to the Heaven was always held by Christians. It turned into a public belief, and in the 20th century, it was considered as an essential belief of the Catholic Church.[27] The doctrine was also accepted by the Orthodox Church, but it is rejected by the Protestant Church.[28]

A hadith in al-Kafi implies that Maryam (a) died when Jesus (a) was still alive and her corpse was washed by Jesus (a).[31]

The Qur'an referred to Maryam (a) as a chaste and elite woman[32] and introduced her as a role-model for believers.[33] Quranic verses imply that Maryam (a) spoke with angels on numerous occasions.[34] The Qur'an says that Maryam (a) was raised by God: "Thereupon her Lord accepted her with a gracious acceptance, and made her grow up in a worthy fashion, and He charged Zechariah with her care. Whenever Zechariah visited her in the sanctuary, he would find provisions with her. He said, ‘O Mary, from where does this come for you?’ She said, ‘It comes from Allah. Allah provides whomever He wishes without any reckoning.’"[35]

According to exegetes of the Qur'an, God provided summers fruits for Maryam (a) during winters and winter fruits during summers.[36]

In Shiite and Sunni hadiths, Maryam (a) is mentioned as one of the four superior women of the Heaven along with Fatima al-Zahra (a), Khadija bt. Khuwaylid (a), and Asiya (a).[37]

Maryam (a) has a crucial role in the Christian Theology. In fact, there is a branch of theology under "Mariology" which is concerned with the character and role of Maryam (a). Her role began to be appreciated since the Middle Ages. She was considered to have a position lower than divinity and higher and more sacred than angels and saints. It was publicly believed at the time that angels and saints were servants of Maryam (a).[39]

Moreover, in some communities, such as the Christians of the Arabian Peninsula, people believed in Trinity and worshiped Maryam (a) along with God and Jesus (a).[40] It is said that the Virgin Mary was worshiped until the 16th century in some cities of Europe.[41] The belief has been condemned in the Qur'an.[42]

What is more, the infallibility of Maryam (a) was discussed in the Middle Ages, and eventually, in 1854, the belief has been announced by the Catholic Church as an infallible doctrine.[43] However, the Orthodox Church denied Maryam's infallibility.[44]

Poets such as Nizami Ganjavi, 'Attar, Sana'i Ghaznavi, and other Persian poets have referred to Maryam (a) in their poems.[47]