From WikiShia
(Redirected from Muhammad al-Dibaj)
Jump to: navigation, search

Muḥammad b. Jaʿfar (Arabic: محمد بن جعفر) (d. 203/818-9), well known as Muḥammad al-Dībāj (محمد الدیباج), was one of the children of Imam al-Sadiq (a). He revolted against Abbasids in 199/814-5; but he was captured by al-Ma'mun. Muhammad died in Khurasan and al-Ma'mun performed his funeral prayer.

Muhammad son of Imam al-Sadiq (a) was among the scholars of his time and a transmitter of the hadiths of his father.[1] He was titled as "Dibaj" because he was good-looking;[2] but, his hadiths are considered weak and unreliable. He was a brave and generous person. He agreed with Zaydiyya about armed uprising.[3] Khadija bt. 'Abd Allah b. al-Hasan was his wife.

In 199/814 and according to some reports in 200/814, he made an uprising against al-Ma'mun in Mecca. They say that he did not agree to make an uprising first and did it after he was encouraged by some of his companions and family members.[4] His uprising was contemporary with a rebellion taken place at the beginning of the caliphate of al-Ma'mun and at the same time, different uprisings were made by Alids and other dissidents of Abbasids in Islamic lands, including the uprising of Ibn Tabataba which gained many successes in Iraq at that time.

Another Alids named Husayn b. Hasan Aftas took the power in Mecca. According to some reports, Husayn b. Aftas who encountered people's dissent and also saw the failure of other uprisings, went to Muhammad al-Dibaj and offered him the caliphate to use his popularity. Muhammad did not accept first, until after the insistence of his son and Husayn Aftas.[5] According to al-Mas'udi, Muhammad al-Dibaj was first a follower of Ibn Tabataba and called people toward him. After the death of Ibn Tabataba, he claimed the caliphate and was called "Amir al-Mu'minin".[6]

His Presence Before al-Ma'mun

Isa Juludi was the commander of the soldiers sent by al-Ma'mun to fight al-Dibaj. After some encounters in Hijaz and regions surrounding Mecca, he defeated the companions of Muhammad and captured him. After being captured, al-Dibaj spoke in Mecca for people, expressed his regret and said, "I was told that al-Ma'mun has died and thus I accepted the caliphate."[7] 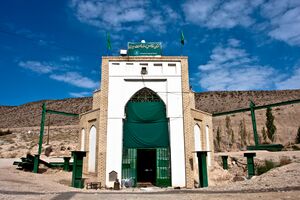 Tomb attributed to Muhammad b. Ja'far in Damqhan, Iran

According to some reports, when Imam al-Rida (a) was martyred, Muhammad b. Ja'far was in Khurasan and al-Ma'mun summoned him together with other Sayyids, the day after the martyrdom of Imam al-Rida (a) and informed them about it.[8]

Muhammad passed away in Khurasan. Al-Ma'mun participated in his funeral and performed funeral Prayer on his body.[9]