From WikiShia
(Redirected from Zakariyya b. Adam al-Qummi)
Jump to: navigation, search

This article is about Zakariyya b. Adam al-Ash'ari al-Qummi. For other people named Ibn Adam, see Ibn Adam (disambiguation).

Abu Yahya[1] Zakariyya b. Adam was from the Ash'ari Family who had migrated from Kufa to Qom.[2] His father was Adam b. 'Abd Allah b. Sa'd al-Ash'ari[3] who is considered by al-Shaykh al-Tusi as a companion of Imam al-Sadiq (a).[4] There is a hadith from Imam al-Rida (a) transmitted by Zakariyya from his father, Adam b. 'Abd Allah.[5]

According to a hadith, he told Imam al-Rida (a): "I want to leave my household because there are many stupid, ignorant people among them". The Imam (a) said: "do not do this, because God removes all the catastrophes from your household (in another version: from people of Qom) because of your presence among them, just as he removed the catastrophes from people of Baghdad because of Abu l-Hasan al-Kazim (a)."[14] 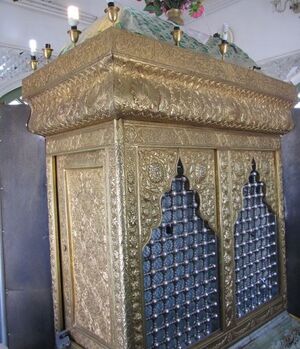 "May God bless him on the day he was born and the day he died and the day he will be resurrected to life. He lived throughout his life with awareness of, and commitment to, the truth, and practiced whatever was obliged by God and the Prophet (s). He—may God bless him—died while he neither broke a pledge nor changed a ruling. May God reward him for his (good) will and his efforts".[19]