List of works by Muḥammad Ḥirz al-Dīn is collection of works by Muhammad Hirz al-Din (d.1365/1945-6), a Shi'i scholar of jurisprudence, principals of jurisprudence, literature, and rijal in the 14th/20th century. More than seventy works in different disciplines are attributed to him. Ma'arif al-rijal and Maraqid al-ma'arif are among his most famous books.

Works in Principals of Jurisprudence 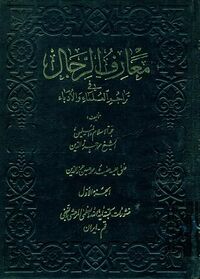 He has written some important works in Rijal and Tarajim (the science of biographies) as well:

He has numerous works in literature as well, including: