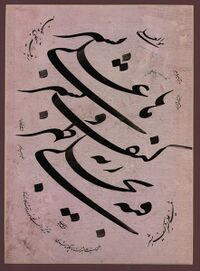 Hā, ʿAlī bashar, kayfa bashar (Arabic: ها علي بشر كيف بشر, lit: ʿAli is a human, but what a human!) is a verse of a well-known qasida (or ode) known as “Madhiyya” (laudative) or “Ghadiriyya,” which is composed in Arabic in praise of Imam ʿAli (a). The ode was composed by Mulla Mihr 'Ali Tabrizi Khu'i, a poem of Ghadir in the thirteenth/nineteenth century, who is known for this ode.

The ode has twenty to forty verses, and it was composed between 1216/1801-2 and 1240/1824-5. It attracted the attentions of Shiite orators and poets, as many poems have been composed with a similar metre and rhymes, some of which have borrowed its verses.

The qasida or ode of “Ha ʿAli bashar, kayfa bashar,” known as Madhiyya or Ghadiriyya,[1] is an ode in Arabic composed by Mulla Mihr ʿAli Tabrizi Khuʾi in praise of Imam ʿAli (a).[2]

The qasida, “Ha ʿAli bashar, kayfa bashar,” has attracted the attention of Shiite orators and poets. A number of poems are composed in the same metre and rhyme (takhmis, or cinquain or pentastich), in which some of its verses are borrowed.[5] The ode is translated into forty Persian verses with the same metre and rhymes by Mirza Muhammad Rida Basirat Shirazi.[6]

{{Main|Mihr 'Ali Tabrizi]] Mulla Mihr ʿAli Tabrizi Khuʾi (1182/1768-9-1262/1845-6), with the pen-name Fadawi, was a poet of Ghadir in the thirteenth/nineteenth century. He wrote poems in Turkish, Persian, and Arabic.[7] He is said to be a mystic, philosopher, a scholar, and a master of most of the sciences of his time.[8] Mulla Mihr ʿAli is mainly known for his Madhiyya or Ghadiriyya ode.[9] He wrote another qasida or ode in eighteen verses in praise of the Prophet (s).[10]

Seeing the Prophet (s) in the Dream