From wikishia
(Redirected from Hira) 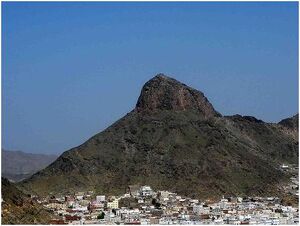 Ḥirāʾ (Arabic: حراء) is one of the famous mountains in Mecca where the Prophet (s) has received his first revelation, resulting it's another name Jabal al-Nūr (the Light Mount). The mountain houses a cave known as cave of Hira' where the Prophet (s) used to spent great deal of time every year to engage himself in solitary worshiping before Islam (tahannuth)[1] and it was there that he was honored with prophethood.

Characteristics of the Mountain

Hira' is a conical mountain northeast of Mecca and is totally separated from the other mountains surrounding the city.[2] According to historical sources, Mount Hira' used to be about 6 kilometers (one farsakh) far from Mecca[3] but now it's enclosed with residential towers due to city expansion. This mountain overlooks Mina and is alongside Mina – 'Arafat route.[4]

It's peak is 560 meters above sea level[5] and there is only one way to climb to the top which is distinguished from the other parts.[6] Neither water nor grass could be found in the mountain. The summit is an area of 40 square meters. There is an open area on the top and there is no rock to block the scenery.

Characteristics of the Cave

The cave of Hira' is situated on the peak of the mountain and only 20 meters away from the summit. To reach the cave one has to pass between two close rocks and then the cave appears.[7] The end of the cave is exactly directed to al-Masjid al-Haram and Ka'ba and the opening of the cave is nearly directed to Bayt al-Maqdis.[8] Al-Masjid al-Haram and it's minarets could be seen from the top.[9] The opening is high enough that a man with average height could go through and stand for prayer. It is lighted inside the cave from sunrise to sunset however it's not heated as outside.[10]

Some historians have mistaken Mount Hira' for Mount al-Thawr in which the Prophet (s) took refuge during the Hijra.[11]

In Historical and Religious Narrations

It's been narrated that Prophet Adam (a) built Ka'ba out of rocks from five mountains, one of which was the Mount Hira'.[12] Some believe the Mount Hira' is called Fārān in Torah[13] but it seems Fārān is a name for all mounts in Mecca not only Hira'.[14]

It's been said that one of the miracles of the Prophet (s) was that the Mount Hira' moved and stopped under his foot on his command.[15]

In a narration Imam 'Ali (a) said "the Prophet (s) used to go the Mount Hira' every year to be away from the world outside but no one would see him except me".[16]

This mount was respected in Jahiliyya (days of ignorance) as well and it's been mentioned in jahilliya's literature such as poems of 'Awf b. Ahwas and Abu Talib (the uncle of the Prophet (s)).[17]

'Abd al-Muttalib (the grandfather of the Prophet (s)) was the first one to choose this place for solitary worshiping (see:tahannuth).[18]

From past till now Muslims would go to visit Hira' cave and it's been said that Du'a (prayers) will be answered there.[19] Also according to some faqihs (jurists) visiting the cave is considered as a mustahabb (recommended) action during the Hajj.[20]