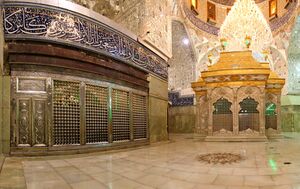 Burial Place of most of the martyrs of the Battle of Karbala, near the holy grave of Imam al-Husayn (a) in his shrine, Karbala

Juwayn b. Mālik b. Qays al-Taymī (or al-Tamīmī) (Arabic:جُوَين بن مالِك بن قَیس التَيمي) was among the Martyrs of Karbala. Some reports have mentioned his name as Juwayr b. Malik or Huway b. Malik. Some other reports have mistaken him for Jun, servant of Abu Dhar.

He first came with the army of 'Umar b. Sa'd from Kufa to Karbala to fight with Imam al-Husayn (a), but when he saw that Ibn Ziyad did not accept the suggestion of Imam al-Husayn (a) and they engaged in a war, he joined Imam (a) at night[1] with some people of his tribe. They have been mentioned as seven people.[2]

He was martyred in the first attack of the army of Ibn Sa'd on the Day of 'Ashura.[3]

His name has been mentioned in Ziyara al-Shuhada, "Peace be upon Juwayn b. Malik al-Duba'i."[4]