This article is about the Al-'Abbas b. Ali b. Abi Talib (a). For other people named Al-'Abbas, see Al-Abbas (disambiguation).

Al-ʿAbbās b. ʿAlī (Arabic: العبّاس بن علي) (b. 26/647 - d. 61/680), known as Abū l-Faḍl (the Father of Excellence) and Qamar Banī l-Hāshim (the Moon of Banu Hashim), is the son of Imam Ali (a) and Umm al-Banin. He was the commander and standard-bearer of the caravan of Imam al-Husayn (a) in the Battle of Ashura'. Shi'a considers Abbas among the children of Imams (a) holding the highest positions. Shi'a speaks of his merits and mourn him on the Day of Tasu'a (9th of Muharram).

He is considered the exemplar of dignity, bravery, generosity, and obedience to the infallible Imam (a). In Karbala, he was the standard-bearer and water-supplier of the army of his brother, al-Husayn b. Ali (a) and thus he is also known among Shi'a as Saqqa [the water-supplier] of the plain of Karbala.

According to reports, after the caravan of Imam al-Husayn (a) was faced with water shortage, al-'Abbas succeeded in bringing water for the family and companions of Imam al-Husayn (a) on the 7th of Muharram. On the day of 'Ashura', once again, he (a) attempted to bring water from the Euphrates; but on his return, they shot his leather water pouch, cut his hands, and martyred him.

The father of al-'Abbas was the first Imam of Shi'a, Imam Ali (a) and his mother was Fatima bt. Hizam whom Imam Ali (a) married years after the martyrdom of Lady Fatima al-Zahra (a) and she was then known as Umm al-Banin.[1]

On the 7th of Muharram, when Ubayd Allah b. Ziyad ordered 'Umar b. Sa'd to subdue Husayn (a) and his companions and prevent their access to the water of the Euphrates, Imam (a) called al-'Abbas and sent thirty horsemen with twenty foot-soldiers with him to fill leather water pouches with water and return to the camp. In this attack, there were no causalities from amongst the companions of Imam al-Husayn (a) but some of the troops of Umar b. Sa'd were killed.[12]

On the evening of Tasu'a, Shimr went near the tents of the caravan of Imam al-Husayn (a), and offered clemency for the sons of Umm al-Banin, including al-'Abbas,[14] but al-'Abbas ignored him, until Imam al-Husayn (a) asked him to reply to Shimr. Al-'Abbas told Shimr, "May your hands be cut and curse [of God] be upon your clemency. O the enemy of God! You suggest us to abandon our brother and master al-Husayn (a), son of Fatima (a), and join the accursed, sons of the accursed?! You give us clemency while the son of the Prophet (s) [Husayn b. Ali (a)] is not safe?!"[15]

Shimr called al-Abbas his nephew because Shimr and al-'Abbas' mother, Umm al-Banin, were from the same tribe i.e., Banu Kilab.

Zuhayr told al-Abbas about how Imam Ali (a) proposed to Umm al-Banin and mentioned that the intention of Imam Ali (a) from marriage was having brave sons, and said, "O al-'Abbas! Your father wanted you for a day like today; behold not to fail to fulfill your duty!" Al-'Abbas became angry about such words and told him, "Zuhayr! Do you want to lionize me with such words?! By God I swear, I would not fail to assist and support my brother until death. I will show you that tomorrow in a way that you would have never seen in your life!"[17] On the morning of Ashura', when Imam al-Husayn (a) finished his prayer and worships, the enemy's army held a battle formation and declared war. Imam (a) prepared his troops for defense. They consisted of thirty-two horsemen and forty foot-soldiers.

In the first hours of the battle, four troops of Imam al-Husayn (a) namely Amr b. Khalid al-Saydawi, Jabir b. al-Harith al-Salmani, Mujammi' b. 'Abd Allah al-'Aidhi, and Sa'd, the freed slave of Amr b. Khalid made a group attack on the army of Kufa.

The enemy besieged them. When the siege ring was so tightened that they completely disconnected from Imam's (a) army, al-'Abbas rushed towards them alone and succeeded in breaking the siege and rescuing the four.[19]

"When al-'Abbas b. Ali (a), may God's blessings be upon him, saw that many of his relatives were martyred, told his brothers Abd Allah, Ja'far, and 'Uthman, 'O sons of my mother! You go ahead so that I see you have purified your goal for God and the Prophet (s) since you do not have any children.' Then 'Abd Allah went to battle and fought severely. Then he and Hani b. Thubayt al-Hadrami exchanged two hits of sword, and Hani killed him. Then Ja'far b. Ali (a), may God's blessings be upon him, went ahead, and Hani killed him too. When 'Uthman b. Ali filled the empty place of his brothers, Khawli b. Yazid shot an arrow toward him and dropped him. Then, a man from Banu Darim attacked him and beheaded him. The traditional mourning ceremony of 'Alambandan in Masuleh, a city in northern Iran. In this ceremony which is done every year in mourning days of Muharram, people of the city do Sinizani, while they're singing a special song about 'Abbas b. Ali (a).

The army of 'Umar b. Sa'd rushed toward the camp of Imam al-Husayn (a) and besieged them. Imam (a) became so thirsty and went on the top of a hill and headed towards the Euphrates while his brother al-'Abbas was walking ahead of him.

The army of 'Umar b. Sa'd stopped them. Among them, there was a man from the tribe of Banu Darim who told the army, "Woe be to you! Stop him from reaching the Euphrates and do not let him reach the water. Imam al-Husayn (a) said, "O God! Let him die thirsty!" That man became angry and shot an arrow towards Imam (a) which hit Imam (a) under his chin. Imam (a) took the arrow out and put his hand on the wound. When his hand became full of blood, let it spill and said, "O God! I complain to you about what they do about the son of the Prophet's (s) daughter." He (a) then came back while he (a) was very thirsty. The army besieged al-'Abbas and separated him from Imam al-Husayn (a). He (a) fought them until he was martyred. Zayd b. Warqa' al-Hanafi and Hakim b. Tufayl al-Sunbusi killed al-'Abbas after he (a) could not move due to the severity of his wounds.[20]

About his martyrdom, Ibn Shahrashub wrote, "al-'Abbas was the water-bearer, Qamar Bani Hashim and the standard-bearer of Imam al-Husayn (a) who was elder than his brothers. He (a) went out of the camp to bring water. The enemy attacked him and he (a) fought them and dispersed them. Then Zayd b. Warqa' al-Juhani had laid an ambushed from behind a palm tree, was helped by Hakim b. Tufayl al-Sunbusi to attack the right hand of al-'Abbas and cut it. Al-'Abbas took the sword with his left hand and attacked them, but he (a) was weakened. Then Hakam b. Tufayl al-Ta'i, who had ambushed him from behind a palm tree, hit him on his left hand. Then al-'Abbas shouted,

O my soul! Do not fear the unbelievers and be blessed by the mercy of great God and being with the noble Prophet (s); these people cut my left hand unjustly. My Lord will drop them in the flames of hell. 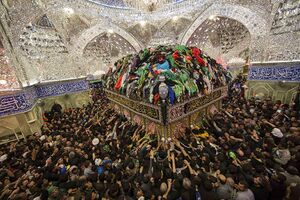 'Abbas (a) has a great position amongst Shi'a and thus, they hold special ceremonies, some of which are mentioned below:

In religious rituals of the first ten days of the month of Muharram, 9th of Muharram, which is called the day of Tasu'a, is dedicated to mourn for 'Abbas (a) and Shi'a hold mourning ceremonies for Abu l-Fadl al-'Abbas (a) in the mosques, gatherings and Tekyehs.

Due to the eminence of al-Abbas (a), Ta'ziyas and Shabih-khani plays, dedicated to al-Abbas (a), are held in different places. In these certain forms of Ta'ziya, special parts are played such as the separation of al-Abbas (a) from the children of Bani Hashim, farewell to Imam al-Husayn (a), farewell to Lady Zaynab (a), war cries to the enemies, cutting off his arms, how he (a) was martyred and going of Imam al-Husayn (a) to him.

Maqam Kaff al-'Abbas (a) refers to two places where it is said that the hands of 'Abbas (a) were cut off and dropped to the ground. These two places are in the north-east and south-east of the shrine at the entrances of two alleys leading to the bazaar. In these two places, some symbols are made which pilgrims visit.[24]

It is narrated from Imam al-Sajjad (a) that, "May God have mercy upon my uncle al-'Abbas. He surely made the sacrifice and did a great fight until his hands were cut and he sacrificed himself for his brother. God gave him two wings like his uncle Ja'far al-Tayyar to fly in paradise together with angels. Indeed, al-'Abbas has a position before the Almighty that all the martyrs would wish to reach on the Day of Judgment."[25]

Imam al-Mahdi (a) said, "Peace be with Abu l-Fadl al-'Abbas, son of the Commander of the Believers (a) who sacrificed his soul for his brother; used this world as a means for the hereafter and was sacrificed for his brother. He (a) was a guardian who tried hard to bring water to the thirsty of the camp and both his hands were cut in Jihad on the way of God. May God distance his killers Yazid b. Raqad and Hakim b. Tufayl al-Ta'i from His mercy."[28]