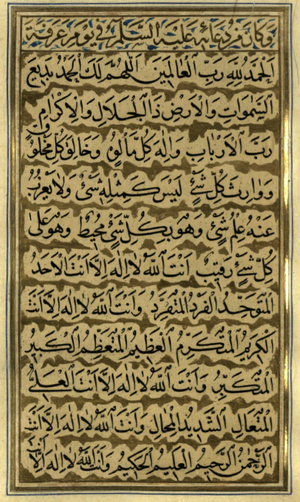 The forty-seventh supplication of al-Ṣaḥīfa al-Sajjādīyya (Arabic: الدعاء السابع والأربعون من الصحيفة السجادية), known as Imam Sajjad's ʿArafa Supplication, is a supplication transmitted from Imam al-Sajjad (a), recited on the day of 'Arafa. This is the longest supplication in al-Sahifa al-Sajjadiyya, involving themes such as divine names and attributes, prayers for and greetings to Prophet Muhammad (s) and his Household (a) and Shias, as well as some moral virtues and vices of the soul. In this supplication, Imam al-Sajjad (a) refers to the confession to the position of the Prophet's Household, compliance with their commands, resort to their guardianship, and expectation of their government as characteristics of Shias.

The doctrines of the supplication are classified in terms of theology, greetings to the Prophet (s) and his household, Imams, confession to one's wrongdoings, and requests to God.

The forty-seventh supplication has been interpreted in books concerning mystical supplications and ʿArafa-related mysticism.

The forty-seventh supplication, known as Imam Sajjad's ʿArafa supplication, is a supplication in al-Sahifat al-Sajjadiyya, which is recited on the day of ʿArafa. In this supplication, Imam Zayn al-'Abidin (a) is concerned with the following themes: (1) monotheism, divine names and attributes, and praise of God; (2) prayers for Prophet Muhammad (s); (3) prayers for Infallible Imams (a); (4) prayers for followers of the Infallibles; (5) sins and sinfulness; (6) asking God for forgiveness; (7) ways of repentance to God; (8) Satan and his seductions; (9) death and an outline of the resurrection; (10) moral virtues and the vices of the human soul.[1] According to Mamduhi Kirmanshahi, ʿArafa supplication is the longest supplication in al-Sahifat al-Sajjadiyya, which is mostly concerned with the mystical relation between God and His righteous servant.[2]

The themes of ʿArafa supplication are classified into certain central topics:

Prayers for Muhammad (s) and his Household

In the second part of Imam Sajjad's ʿArafa supplication, prayers are sent to the Prophet (s), with a reference to types of greetings to him:

In third section of ʿArafa Supplication, Imam al-Sajjad (a) describes the Prophet's Household (a), prays for the Shias, and refers to their characteristics.

In this section, Imam al-Sajjad (a) points out the anomalies of the human soul, asking God for forgiveness.

Asking for the Needs

In the final section of the supplication, Imam al-Sajjad (a) swears by God's close servants and mentions his requests. Here are some of the requests: