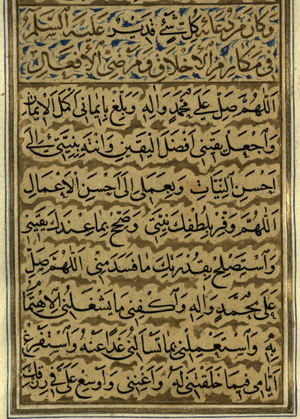 Makārim al-Akhlāq supplication (Arabic: دُعاء مَكارِم الأخلاق) is one of the famous supplications of Imam al-Sajjad (a) and is mentioned as the 20th supplication of al-Sahifa al-Sajjadiyya. Given its educational and spiritual messages, this supplication has been discussed by researchers. Several commentaries have been written for it.

This supplication contains 22 parts, each part begins with sending blessings upon Prophet Muhammad (s) and his household (a). In these parts, Imam al-Sajjad (a) mentions his requests for being adorned with good characteristics and for being removed of some vices and introduces some moral virtues and vices.

This supplication has been referred to by researcher of supplications since many centuries ago and many scholars have written books as commentaries on al-Sahifa al-Sajjadiyya in general or for this supplication in particular. This can have two reasons:

This supplication begins with sending blessings upon Muhammad (s) and Ahl al-Bayt (a). In this supplication, salutation upon the Prophet of Islam (s) has been repeated 20 times and in every part,[2] after Salawat, a new important request is mentioned. It is said that the reason for this repetition is primarily for partitioning and determining the parts, some of which have been divided by nine, eight, or seven requests. Secondly, receiving energy after a new important request is through a request together with another request and a request upon answering another request.

The grounds of the requests mentioned in this supplication show a kind of worldview based on ideological teachings. Some of them which have roots in religious worldview are:

This supplication is among supplications repetition of which leads to promotion of the society and creation of value in it. Almost half of the phrases of this supplication are related to social aspect. Supplications address social aspect of life because Islam is the religion for life and since self-purification has to show itself outside in interaction between people, no corner of one's life is separate from his spiritual life.

Messages of the Supplication

Requests from God mentioned in this supplication either address individual ethics or collective ethics.